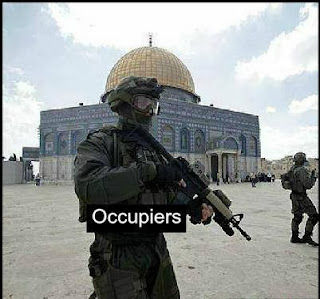 07.06.1967: immediately after occupying East Jerusalem, the Zionists confiscated the keys to Bab El-Magharbeh, the Western Gate of Al-Aqsa compound. The Magharbeh Quarter with its 138 houses was destroyed, in addition to the Afdaliyeh school, the Buraq Mosque and the Magharbeh Mosque.
09.06.1967: for the first time since 1167, the congregational Friday prayer was not held on orders from the occupation authorities.
09.08.1967: Chief Chaplain of the Israeli Army Shlomo Goren, later Israel’s chief Rabbi, leads 50 armed extremists ontoAl-Haram Ash-Sharif saying “It is a holy commandment” for Jews to go to the Muslim grounds, which Jews call the Temple Mount”, and conducts prayers there. 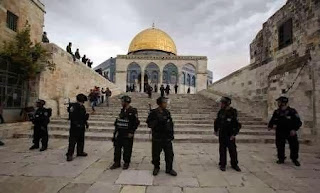 On the morning of 21.8.1969 an Australian-born terrorist, Denis Michael Rohan, entered Al-Aqsa mosque and set the 800 year old Nurrudin Zinki Mihrab on fire, destroying the old priceless wood and ivory pulpit sent from Aleppo by the Muslim ruler Saladin and part of the ceiling. The fire broke out around 7: 20 am and the Palestinians rushed to extinguish it and save the mosque. Fire brigades from Bethlehem, Ramallah even far-away Nablus and Hebron rushed to help save Al-Aqsa, while the Israeli Jerusalem fire brigades, which were the closest to the scene, were for obvious reasons delayed. Also, for another “unexplained reason” some 8 minutes after the fire brigades started extinguishing the fire, the water supply was cut off, keeping in mind that the water supply and water network were under the control of the Israeli Jerusalem municipality.
The Palestinian firemen, Palestinian Jerusalemites and all Palestinians who rushed from everywhere to save Al-Aqsa transported water in buckets by hand until they were able to extinguish the fire. And as usual, the Zionist state invented excuse after excuse to “justify” this crime, claiming the Zionist attacker was deranged, a claim given to all those who commit crimes against Palestinians to protect them from prosecution.
Also, although it took almost 5 hours to distinguish the fire, Israelis later claimed it took only one hour in a blatant effort to minimize the hideous crime. Three days before the terror attack, on 18.8.1969, Yediot Ahronot published a report emphasizing that the “Solomon Temple” would be rebuilt in the same spot that “Strangers tried to seize”. On 25.8.1969 the Jerusalem Post published a report on the life of Rohan, who was brought by the Jewish Agency to work in a Kibbutz and to be educated in Zionist teachings and Hebrew language, relating Rohan’s dreams of building “Solomon’s Temple” in Jerusalem. While this terror attack was condemned worldwide, wide segments of the world Jewry and Christian Zionists praised it. On 15.9.1969 and after several meetings, the UN Security Council in its Resolution 271 (1969) condemned the act of destruction and profanation of Al-Aqsa. 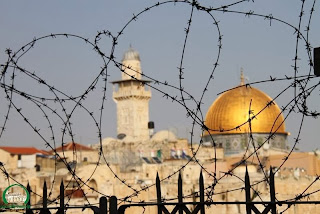 16.11. 1969: The Israeli occupation authorities seize the Fakhriyya Corner on the south-western side of Al-Haram Ash-Sharif.
19.12.1969: a group of militant Jews storm their way to Al-Haram Ash-Sharif to “conduct Hanukkah prayers.”
14.08.1970: an attempt by the fanatic “Temple Mount & Land of Israel Faithful“ group lead by fanatic Zionist Gershon Solomon to forcibly enter the premises of Al-Haram Ash-Sharif is repulsed by Palestinian. The confrontation resulted in tens of Palestinians being injured by Israeli army gunfire. This group is an ultra-fanatic Jewish group dedicated to the so-called rebuilding of the “Solomon Templ”e on the site of Al-Aqsa Mosque after demolishing it.
03.03.1971: Jewish fanatic Gershon Solomon leads “Temple Mount Faithful” followers onto Al-Haram Ash-Sharif, who are expelled after struggling with Palestinian guards.
11.07.1971: 12 members of the Bitar fanatic Zionist group enter the Al-Aqsa and try conducting praying there.
22.07.1971: the Bitar fanatic Zionist group conducts prayers in Al-Haram Ash-Sharif. 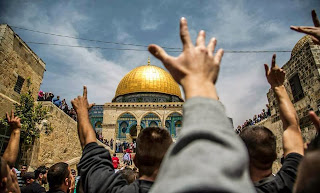 03.03.1974: Gershon Solomon and his followers storm Al-Aqsa Mosque.
14.07.1978: Gershon Solomon leads militant Jews onto Al-Haram Ash-Sharif.
08.1979: attempts by members of the Jewish extremist groups Gershon Solomon and Meir Kahane to enter Al-Aqsa Mosque are prevented by thousands of Palestinians; ensuing clashes leave dozens of Palestinians wounded.
11.10.1979: Israeli forces wound dozens of worshippers by shooting and throwing tear gas into Al-Aqsa.
19.04.1980: a group of Jewish Rabbis and sages hold a semi-secret conference devoted to exploring ways and means “to liberate the Temple Mount from Muslim hands” and announce they would work on overtaking Al-Aqsa.
10.08.1980: 300 heavy armed Gush Emunim fanatic settlers overcome Palestinian guards and storm Al-Haram Ash-Sharif, but are later dispersed. These fanatics are associated with Stanley Goldfoot and the “Temple Mount Faithful” fanatic group.
28.08.1980: The Israeli occupation authorities dug a tunnel right underneath Al-Aqsa Mosque.
05.09.1980: Rabbi Meir Kahane of the Gush Emunim terrorist group attempts to blow up Al-Aqsa with explosives. 120 kg of high explosives and scores of bombs were accidentally discovered only 2 minutes before donation at a distance of 50 m from Al-Aqsa. It was a Friday, meaning a day when tens of thousands of Palestinians would gather in Al-Haram Ash-Sharif for prayer. 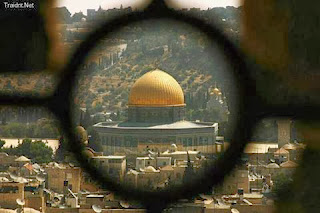