Ancient history:
Both Jews and Arabs claim historical ancestry in region. However muslim believes that all Prophets before Muhammas SAW, inviting peoples to submit totally to Allah almighty, that includes all Prophet of Allah from the jews.

1917:
Balfour Declaration announces support of British government for “the establishment in Palestine of a national home for the Jewish people,” while insisting also upon the rights of non-Jewish peoples

1945-50:
US and Britain refuse to open doors to Jewish holocaust refugees, directing flow of migrants to Israel

The United Nations Special Committee on Palestine recommended partition, and on 29 November 1947 the United Nations General Assembly voted to partition Palestine into two states - an Arab and a Jewish one. The partition resolution (181) intended administration of Palestine to be in the hands of five UN representatives and assumed free Jewish immigration into the Jewish area even before the creation of a Jewish state:

1950s-60s:
Beginnings of officially-recognized Middle East terrorism problems, including airplane hijackings and bombings, first carried out by Israel, eventually by Palestinians and others; Ariel Sharon’s unit commits massacre at Qibya in 1953

1969 August 21:
Burning of Al-Aqsa Mosque - Dennis Michael Rohan, an Australian tourist who was termed responsible for the arson. At the time the fire was being extinguished, there were also claims that the Israeli fire extinguishers threw gasoline on the fire instead of water. Even while Israel has repeatedly denied that Rohan was a Jew, facts have proved him to be a Zionist, recruited by the violating parties to commit this sinful task. This claim of Rohan being an Israeli was also stated by The Wall Street Journal on November 13, 2000. One of the consequences of Al-Aqsa fire was the creation of the OIC by King Faisal of Saudi Arabia in the first-ever meeting of Islamic Summit which was convened in September 1969 in Rabat, Morocco. However, the efforts of the OIC have not succeeded in keeping the Mosque safe from the terrorist attacks and defilement even to this day. 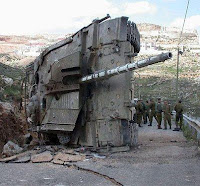 
The war began when the coalition launched a joint surprise attack on Israel on Yom Kippur, the holiest day in Judaism, which happened to occur that year during the Muslim holy month of Ramadan. Egyptian and Syrian forces crossed ceasefire lines to enter the Israeli-held Sinai Peninsula and Golan Heights respectively, which had been captured and occupied since the 1967 Six-Day War.

1978:
US, Israel, and Egypt sign Camp David Peace Accords, returning land to Egypt and buying Egypt out of pro-Palestinian camp

1982: Sabra and Shatila Massacres.
Operation Peace for Galilee launched, with Israeli forces invading southern Lebanon; operation leads to more than 17,000 Arab deaths and culminates in massacres of thousands of civilians at Sabra and Shatila refugee camps 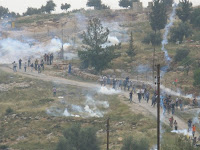 1988:
PLO declares independent Palestinian state, recognized by over 100 nations at UN, but not by US; PLO reaffirms recognition of Israel’s existence as part of two-state settlement proposal

1990:
Massacre of Palestinians at Al-Aqsa mosque in Jerusalem

1990-91:
Elements of Palestinian leadership side with Iraq in Persian Gulf War, thus losing international leverage in aftermath of war; Palestinian refugees from Kuwait return to Jordan and West Bank

Bush administration in US delays credits to Israel for new housing (for Russian refugees), helping bring down Itzaak Shamir government
1993:
Yassir Arafat and Itzaak Rabin sign Oslo Peace Accords, leading to formation of Palestinian Authority in Gaza and parts of West Bank; many Palestinians reject the legitimacy of this authority; some support swings from PLO to Hamas

1999: May:
Ehud Barak of the Labour Party is elected prime minister under the One Israel banner.

2000 July:
The Camp David summit between Barak, and Yasser Arafat, the president of the Palestinian Authority, aimed at reaching a "final status" agreement, fails after Arafat refuses to accept a proposal drafted by the US and Israeli negotiators.

2001 February 6:
Sharon is elected the leader of the Likud party and refuses to continue negotiations with Arafat.

2004 March 22:
Sheikh Ahmad Yassin, the founder and leader of the Hamas movement, is assassinated by an Israeli helicopter gunship.

2004 April 17:
Abd al-Aziz al-Rantissi, the co-founder of Hamas and successor to Yassin, is killed by the Israeli army.

2004 July 9:
International Court of Justice rules that the Israeli separation barrier violates international law and must be removed.

2005 January 9:
Mahmoud Abbas is elected president of the Palestinian Authority.

2006 January:
Sharon suffers a major stroke that leaves him in a coma.

2006 June 25:
Armed Palestinians carry out a cross-border raid from the Gaza Strip and capture Corporal Gilad Shalit, besides killing two Israeli soldiers and wounding four others.

2006 October:
A number of mediation conferences are held. Egypt and Qatar send their foreign ministers to meet with both sides. Other Palestinian groups like the Islamic Jihad and the Popular Front for the Liberation of Palestine mediate between the two sides to stop the clashes.

2006 November 13:
Following talks between Hamas and Fatah, both sides agree to form a unity government.

2006 December 16:
Abbas calls for new elections as a solution to the ongoing crisis.

2007 January 30:
Fatah and Hamas reach a ceasefire agreement mediated by Egypt after a series of clashes that led to the death of 32 Palestinians. Both sides welcome a Saudi initiative to meet in Mecca.

2007 February 8:
Hamas and Fatah agree on a deal in Mecca to end factional warfare and to form a coalition, hoping this would lead Western powers to lift crippling sanctions imposed on the Hamas-led government.

2007 February 9:
The Quartet welcomes the role of Saudi Arabia in reaching the agreement to form a Palestinian National Unity government but later reaffirms that it must obey international demands to recognise Israel, renounce violence and abide by previous peace agreements.

2007 February 15:
Ismail Haniya and his cabinet resign. Haniya is re-appointed by Abbas and begins the process of forming a new Palestinian unity government.

2007 March 15:
Palestinians reach agreement on the formation of the government.

2007 March 17:
The new Palestinian unity government holds its first cabinet meeting in Gaza City, with ministers in the West Bank participating from Ramallah via video link.

2007 April:
Israel plans Gaza invasion, a day after Olmert calls for a regional peace conference with Arab states. The US gives Abbas $60m to boost his presidential guard and for other security expenses.

2007 May:
Israel presses ahead with air raids on Gaza. The strikes came after Olmert said that Israel would continue its crackdown on Hamas following the firing of rockets from the enclave.

2007 November:
George Bush, the US president, hosts peace talks between Palestinians and Israelis at Annapolis, Maryland, while Hamas still holds control over Gaza.

2008 January 23:
Palestinians blow up part of the border at Rafah, going into Egypt and thousands of Gazans cross the border to buy food and other supplies.

Israel launches Operation Cast Lead, a full scale invasion of the Gaza Strip in response to rocket attacks by Palestinian armed groups. Some 1400 Palestinians are killed, many of them civilians. After 22 days of fighting, Israel and Hamas each declare separate unilateral ceasefires.

2009 June 4:
Barack Obama, the US president, calls for a "new beginning between the United States and Muslims" in a historic speech in Cairo.

2009 September 15:
Goldstone releases his report, accusing both Israel and Hamas of war crimes and possible crimes against humanity during the Gaza war.

2009 November 3:
The US House of Representatives overwhelmingly passes a resolution denouncing the Goldstone report as "irredeemably biased and unworthy of further consideration or legitimacy."

2009 November:
Netanyahu announces a 10-month so-called freeze on construction in illegal West Bank settlements. The freeze does not apply to East Jerusalem.

2010 May 31:
Israel violently intercepts a Gaza-bound aid flotilla, killing nine activists on board the Mavi Marmara, the lead vessel .

2010 September:
Another round of direct negotiations between the Israeli and Palestinian leadership begins. The talks collapse in the same month after Israel refuses to extend the freeze on settlement construction in the West Bank.

2011 January 23:
Al Jazeera releases The Palestine Papers, revealing a trove of documents, e-mails and minutes of meetings, shedding light on 10 years of negotiations between Israel and the Palestinians


Posted by BERPAUT KEPADA YANG ABADI at 1:59 AM