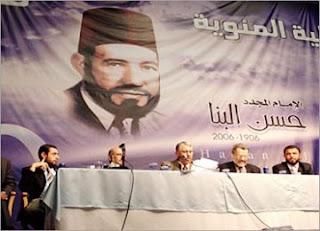 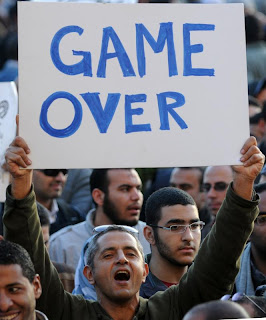 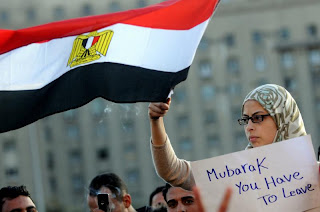 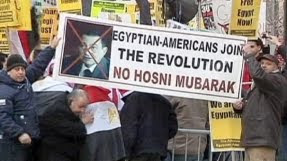 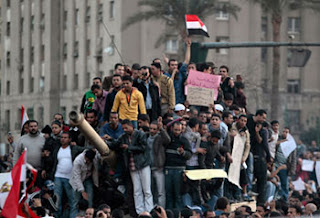 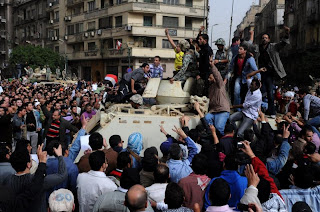 By ESSAM EL-ERRIAN
Published: February 9, 2011
New York Times
# Essam El-Errian is a member of the guidance council of the Muslim Brotherhood in Egypt.


THE Egyptian people have spoken, and we have spoken emphatically. In two weeks of peaceful demonstrations we have persistently demanded liberation and democracy. It was groups of brave, sincere Egyptians who initiated this moment of historical opportunity on Jan. 25, and the Muslim Brotherhood is committed to joining the national effort toward reform and progress.
In more than eight decades of activism, the Muslim Brotherhood has consistently promoted an agenda of gradual reform. Our principles, clearly stated since the inception of the movement in 1928, affirm an unequivocal position against violence. For the past 30 years we have posed, peacefully, the greatest challenge to the ruling National Democratic Party of Hosni Mubarak, while advocating for the disenfranchised classes in resistance to an oppressive regime.
We have repeatedly tried to engage with the political system, yet these efforts have been largely rejected based on the assertion that the Muslim Brotherhood is a banned organization, and has been since 1954. It is seldom mentioned, however, that the Egyptian Administrative Court in June 1992 stated that there was no legal basis for the group’s dissolution.
In the wake of the people’s revolt, we have accepted invitations to participate in talks on a peaceful transition. Along with other representatives of the opposition, we recently took part in exploratory meetings with Vice President Omar Suleiman. In these talks, we made clear that we will not compromise or co-opt the public’s agenda. We come with no special agenda of our own — our agenda is that of the Egyptian people, which has been asserted since the beginning of this uprising.
We aim to achieve reform and rights for all: not just for the Muslim Brotherhood, not just for Muslims, but for all Egyptians. We do not intend to take a dominant role in the forthcoming political transition. We are not putting forward a candidate for the presidential elections scheduled for September.
While we express our openness to dialogue, we also re-assert the public’s demands, which must be met before any serious negotiations leading to a new government. The Mubarak regime has yet to show serious commitment to meeting these demands or to moving toward substantive, guaranteed change.
As our nation heads toward liberty, however, we disagree with the claims that the only options in Egypt are a purely secular, liberal democracy or an authoritarian theocracy. Secular liberal democracy of the American and European variety, with its firm rejection of religion in public life, is not the exclusive model for a legitimate democracy.
In Egypt, religion continues to be an important part of our culture and heritage. Moving forward, we envision the establishment of a democratic, civil state that draws on universal measures of freedom and justice, which are central Islamic values. We embrace democracy not as a foreign concept that must be reconciled with tradition, but as a set of principles and objectives that are inherently compatible with and reinforce Islamic tenets.
The tyranny of autocratic rule must give way to immediate reform: the demonstration of a serious commitment to change, the granting of freedoms to all and the transition toward democracy. The Muslim Brotherhood stands firmly behind the demands of the Egyptian people as a whole.
Steady, gradual reform must begin now, and it must begin on the terms that have been called for by millions of Egyptians over the past weeks. Change does not happen overnight, but the call for change did — and it will lead us to a new beginning rooted in justice and progress.
Posted by BERPAUT KEPADA YANG ABADI at 3:38 PM