Jerusalem is a holy city unto the Children of Abraham. I lament the plight of Palestinian friends living in Bethlehem (and throughout the West Bank and Gaza) who have not been permitted to visit Jerusalem for almost two decades. As a rabbi who believes that my Abrahamic cousins possess an equal right to access Jerusalem, barring entry offends my faithfulness to Judaism. Israel cannot call itself a democracy as long as Palestinian Muslims and Christians are prevented from pilgrimage and prayer in Jerusalem. This is among the many reasons I support the global nonviolent march to Jerusalem. May the Compassionate One who is the Parent of us all, open the gates of compassion and justice for everyone who desires to enter.

As world leaders have done nothing over the past six decades to curb Israel's persistent campaign of ethnic cleansing against the indigenous Palestinian population, civil societies all over the world are taking initiatives to demand an end to the relentless cruelty and mercilessness aimed at a principally unarmed civilian population. The Global March to Jerusalem is another effort by people of conscience to take a stand for justice and for human dignity. The importance of such civil action cannot be overstated.
- Susan Abulhawa, Novelist and human rights activist 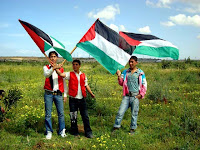 ...it is important for all those committed to peace and justice to support and applaud an initiative such as Global March to Jerusalem…[which]…poses a vivid challenge to the unlawfulness and cruelty of the continuing Israeli occupation of Palestine.

As an anti-war organizer and activist working for justice for the Palestinian people, I hope to see a sea of people marching in unity towards Jerusalem in March of 2012. The march will be a powerful act of solidarity with Palestinians who are fighting for their basic human rights, particularly the right to free movement which the Israeli government has so severely restricted. It is critical that we support non-violent form

s of resistance such as these, which are the only way to attain a peaceful and just solution for everyone in the region.